All elements of CEO pay increased year over year. Both short-term incentives (STI) earned and long-term incentives (LTI) granted grew 7.5% at the median in 2018, while base salaries increased 0.6% at the median. The companies included in the analysis had median 2018 revenues of $13.3 billion and represented 10 different industry sectors. Historical comparisons were drawn against a relatively consistent sample of companies over the last five years.

Here are the key findings from our S&P 500 Early-Filer CEO Pay Analysis:

CEO STI payouts reflected strong financial performance in 2018, with year-over-year median growth in revenue and EBITDA of roughly 10%, and median net income growth of almost 20%. The median 2018 actual STI was 125% of target – the highest in the past five years – with a median payout of nearly $2.2 million. The prevalence of companies paying STI at or above target has remained high, with 77% of CEOs receiving STI payouts at or above target in 2018.

With a majority of the target STI opportunity generally weighted to performance against profitability measures, it is not surprising to see actual payouts above target, as they reflect strong underlying financial performance and generally favorable conditions in the market over the past few years. Since performance goals for STI plans are generally set near levels in the annual operating plan, which is approved by the board, these payouts suggest that companies have been consistently beating budgeted performance in recent years. The natural question is how much of this above-target payout can be attributed to companies’ financial success and how much to performance metric selection and goal setting. With goal rigor attracting increased attention from investors and proxy advisers, this is an area of particular focus for Compensation Committees when designing annual STI plans and attempting to align pay and performance.

Median LTI values granted to CEOs in 2018 were just over $8.4 million, reflecting a 7.5% median increase over the prior year. Shares with vesting tied to performance metrics continue to be the most utilized LTI vehicle amongst the S&P 500, with prevalence increasing to 92% of the sample in 2018 compared to 84% in 2014. Over the same period, the prevalence of shares that vest solely based on service has increased to 62% from 54%, while stock option usage has declined to 58% from 66%.

There are several reasons for this shift in LTI vehicle prevalence and value mix over recent years. Performance shares have increased in both prevalence and weighting as multi-year performance periods have become the standard expectation of institutional investors and proxy advisory firms. Also, similar to STI, performance metrics and goal setting with respect to LTI have garnered increased attention in the pay-for-performance era. Option use and weighting have waned because they are more dilutive than full-value shares in delivering equivalent LTI grant value. Service-based share usage and weighting have remained fairly consistent, as vehicles such as restricted stock continue to be viewed as a key retention element, and maintain their value in a down market.

Going forward, we expect the portion of value allocated to performance-based awards to continue to increase modestly, as companies work to address their pay-for-performance philosophies and manage dilution -- increasingly a focal area for investors scrutinizing equity plans.

With increases in LTI generally outpacing those of base salary and STI in recent years, CEO average pay mix has shifted gradually toward more LTI. Base salary has shrunk to 10% of total direct compensation (TDC) in 2018, compared with 13% in 2014. STI has held steady at roughly 22% of TDC for the past several years, while LTI now accounts for 68% of TDC compared to 65% in 2014. 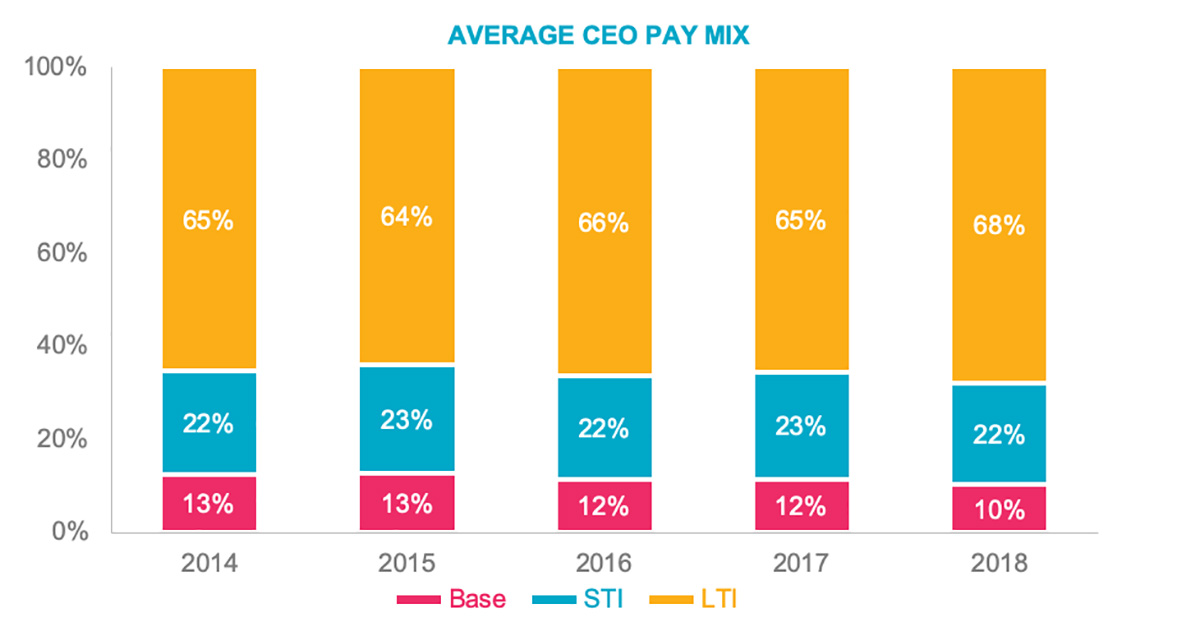 With 90% of the average CEO pay mix now comprised of incentive awards, and with roughly two-thirds of TDC in the form of LTI, it would appear that CEOs are poised for continued, steady pay increases – provided company financial and stock price performance stay robust.

Complete the form below to discuss your executive compensation needs with a consultant.
*Required Fields