Employers Stay the Course in Deciding What to Cover or Not 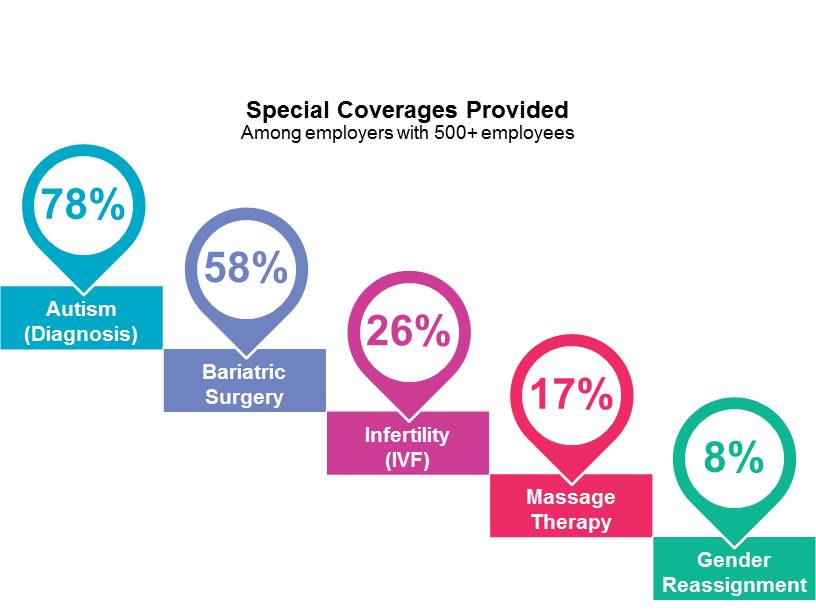 While large, insured group and self-funded employer plans are not required to cover EHBs, they had to eliminate any lifetime or annual dollar limits on essential benefits they did offer, as of Jan. 1, 2014. Employers had the option of dropping a coverage rather than removing benefit limits. At the same time, it was possible that employers comparing their plan to a state benchmark plan might feel the need to add a coverage to make their plan more competitive.

To see if the focus on essential benefits has affected employers’ coverage decisions one way or the other, we compared the prevalence of a number of special coverages in 2013 and 2014, using data from Mercer’s National Survey of Employer-Sponsored Health Plans. The results were mixed, suggesting that large employers’ decisions about what to cover remain influenced by employee expectations, corporate philosophy, and geographic norms.

We saw the most growth (though still modest) in treatment of autism spectrum disorders in 2014. Overall, 85% of large employers provide coverage for at least some diagnosis and treatment services, up from 82% in 2013. Diagnostic services are covered by 78%, up from 74%. Of the different forms of treatment, speech, occupational, and physical therapies and medication management are the most commonly covered (70% and 67% percent, respectively, up from 68% and 63%). Inpatient and outpatient treatment services are covered by 61%, up from 56%. However, there was little change in coverage for intensive behavioral therapies, now provided by 37%.

Bariatric surgery has been shown to be an effective means of improving the health of severely obese individuals. However, only 58% of large employers cover bariatric surgery, unchanged from 2013, and more than half of these will only cover surgery for individuals who have first complied with a behavior modification program. Bariatric coverage is more common among larger employers, and there we did see some growth: Among employers with 5,000 or more employees, 75% offer it, up from 71% in 2013.

Coverage for infertility treatment is about on par with levels seen two years ago. Following a slight increase in 2013, coverage prevalence has returned to 2012 levels. Coverage for evaluation by an infertility specialist is now provided by 59% of employers. Drug therapy is covered by 37%. There has been slight growth in coverage for in vivo and in vitro fertilization, now covered by 25% and 26% of employers, respectively, up from 23% for both in 2012. Coverage for advanced reproductive procedures stands as 14%, up from 11% in 2012 but essentially unchanged from 13% in 2014. Employers in the Northeast are the most likely to cover infertility treatment and employers in the West are the least likely — perhaps because employees in the West are, on average, younger than elsewhere in the country.

Coverage for gender reassignment surgery, while still rare among all large employers, is growing. In 2014, 8% of all large employers provided this coverage, up from 5% in 2013. However, only another 3% say they are considering it. Larger employers are more likely to include this surgery in their plans. But while coverage is offered by 23% of employers with 10,000 or more employees, there was no growth in 2014, and only 5% say they are considering adding it. Employers in the Northeast are twice as likely to provide this coverage as employers in the South.

Despite its popularity, coverage for most alternative medicine therapies remains the exception rather than the rule. While most employers provide coverage for chiropractic services (91%), just under a third cover acupressure or acupuncture (32%), and fewer than a fifth cover massage therapy, homeopathy, or biofeedback. Apart from slow growth in coverage for chiropractic and acupuncture/acupressure treatment, these figures have changed little over the past 10 years. As the employee population ages and looks for help with the inevitable aches and pains, employers might want to consider whether adding coverage for these relatively low-cost services might save money in the long run.