A couple of weeks ago (feels like ages) we launched a brief survey to find out where employers stood on specific provisions in the House GOP repeal-and replace-bill, the American Health Care Act (AHCA). We closed the survey on Thursday with more than 900 responses.  As I was reviewing the results on Friday, the bill was apparently dying -- but now House leaders and President Trump are signaling that it may be revived. Either way, the health reform debate is far from over, and many of the provisions introduced in the AHCA will likely remain part of the discussion.

We didn’t ask for an overall opinion of the bill, but employers’ reactions to individual provisions added up to a less-than-ringing endorsement. To start with what they liked: 66% said that liberalizing HSA rules -- such as allowing higher contributions -- would have a positive effect on their organizations. That’s in the ballpark of the percentage of large employers nationally that offer HSA-eligible plans (53% in 2016). If you don’t offer an HSA-eligible plan and don’t intend to, or if you do offer one but none of your employees are likely to hit the maximum account contribution, you might not believe this provision would have much of an impact, like 29% of our respondents. 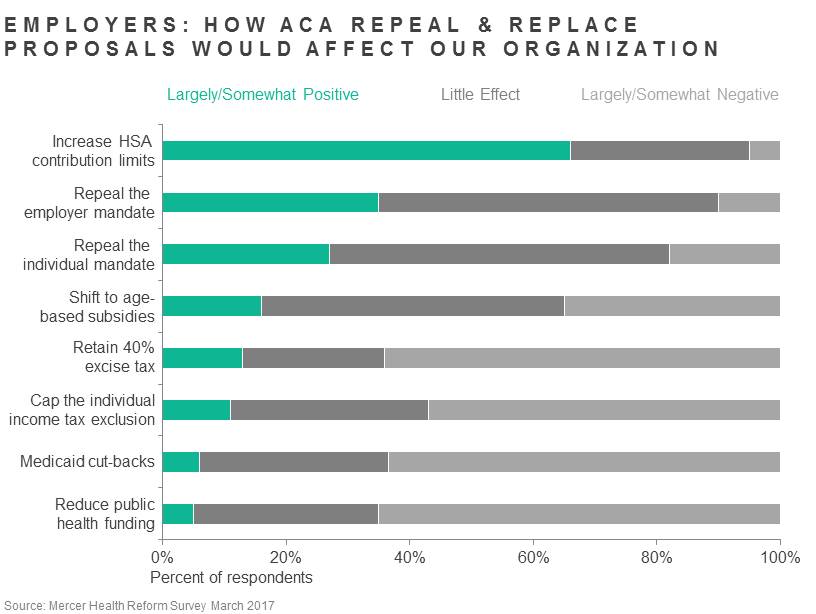 That was the only provision seen as a positive by more than half of the respondents. Next closest is repealing the employer mandate. Just over a third -- 35% -- said it would have a positive effect on their organizations. Most said it would have no impact. Why? Wouldn’t employers like the option to drop coverage for employees working less than 40 hours per week, or to stop worrying about meeting the affordability and minimum plan value requirements? The fact is that most employers already met the ACA requirements before the law was signed. And if they did make changes to extend coverage to more employees or make it more generous, they may not be able to picture clawing that back. Our earlier surveys found that the employer mandate had very little effect on employer plans because employers were already voluntarily providing comprehensive and affordable coverage, so repealing the employer mandate would likewise have little effect.

Repealing the individual mandate was judged as a positive by just 27% of employers; 18% view it as a negative and most believe it would have little effect on their organizations.

Other provisions expected to do more harm than good

For the rest of the provisions we asked about, the view was much more negative than positive. Nearly two-thirds of respondents (65%) believe that cutting funding for public health initiatives would have a negative effect on their organizations. Such a change would scale back or eliminate programs designed to improve community health (for example, vaccinations), and employers are well aware of the extent to which workforce health is tied to community health. Federal programs to monitor and reduce hospital-acquired infections would also be cut, with obvious negative consequences for health care payers.

Nearly as many respondents (64%) say that the proposed Medicaid cutbacks -- ending Medicaid expansion and moving to block grants -- would have a negative effect on their organizations. This suggests that employers are aware and concerned about the impact that an increase in the number of people without insurance could have on the cost of health care. It may be hard to prove, but it stands to reason that providers wind up shifting the expense of treating those who can’t pay to those who can. Last but certainly not least, 64% of respondents told us that retaining the excise tax, as the AHCA did, would have negative consequences for their organizations; our health reform leader Tracy Watts described the excise tax as a dark shadow hanging over strategic planning. We also asked about capping the exclusion on the individual tax, which was in an earlier draft of the bill and may well resurface. Not quite as many saw this as negative, but it was close, at 57%. Those who believe that the excise tax or the cap will not affect their organizations may think they will never hit the thresholds. We wish that were true, but given that health cost generally rises faster than the CPI, the index used to raise the tax thresholds, more likely it will only be a matter of time.

Based on their 2016 plan costs, we project that 23% of large employers will be subject to the excise tax in 2020 when it is slated to go into effect, unless they make changes to the plan.  That percentage almost doubles when we project it out to 2025.

For many employers, avoiding the excise tax won’t be a simple matter of downgrading a “Cadillac” plan, because their plans weren’t Cadillac to begin with! As we’ve shown, many factors that drive plan cost are outside an employer’s control -- in particular, location and employee demographics. That’s why Mercer will continue to advocate against the excise tax and a cap on the individual health benefit tax exclusion -- provisions that will make it harder for employers to continue providing affordable, comprehensive coverage to the more than 177 million Americans that now rely on it.