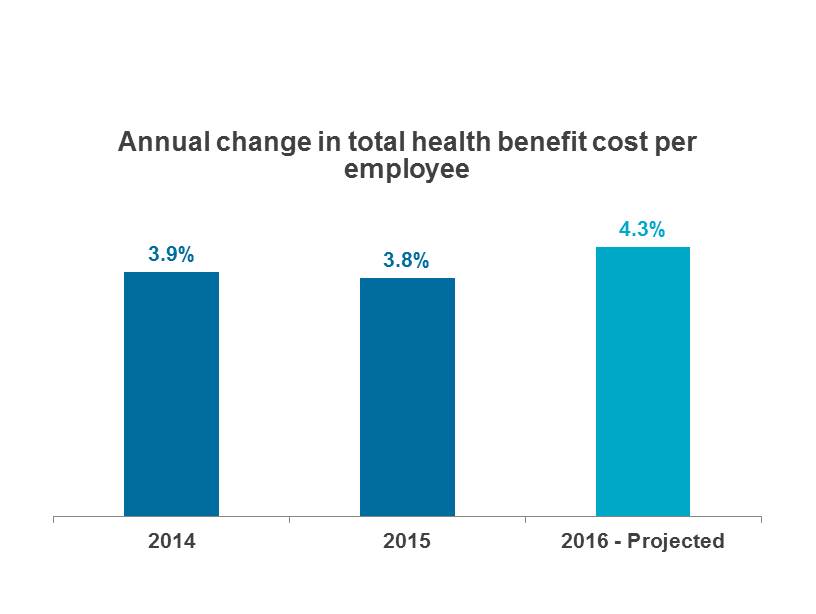 Last week the Centers for Medicare and Medicaid Services (CMS) released a report on U.S. health care expenditures in 2014. The big news was that total spending rose 5.3%, ending a multiyear trend of sharply smaller cost increases -- a 2.9% rise in 2013 and an average annual increase of 3.7% from 2009 through 2013. The national tab surpassed $3 trillion, a number most of us can’t comprehend, but it works out to about $9,500 per person.

CMS attributes the acceleration in cost to expansion of coverage under the Affordable Care Act (ACA) -- subsidized coverage on the exchanges began in 2014 -- and a sharp increase in spending on specialty prescription drugs, especially new therapies to treat hepatitis C.

Meanwhile, employers reported increases in total health benefit cost per employees of 3.9% in 2014 and 3.8% in 2015, lagging the national cost increase by more than a percentage point. The business imperative to control health benefit cost growth has taken on a new urgency with the fast-approaching implementation of the excise or “Cadillac” tax, one of the ACA's final provisions. Employer actions to reduce their exposure to the 40% excise tax, which goes into effect in 2018, has helped hold growth below 4% for a third straight year.

Mercer’s newly released National Survey of Employer-Sponsored Health Plans (with 2,486 participants in 2015) found that total health benefits cost averaged $11,635 per employee in 2015. This cost includes both employer and employee contributions for medical, dental, and other health coverage, for all covered employees and dependents. Small employers were hit with higher increases than large employers. Cost rose by 5.9% on average among employers with 10-499 employees but by just 2.9% among those with 500 or more.

Employers predict that in 2016 their health benefits cost per employee will rise by 4.3% on average. This increase reflects changes they will make to reduce cost; if they made no changes to their current plans, they estimate that cost would rise by an average of 6.3%. But about half of all employers indicated that they would make changes in 2016.

Employers are moving on several fronts to hold down health cost growth. In the best scenarios, they’re addressing workforce health, restructuring provider reimbursement to reward value, and putting the consumer front and center by providing more options and more support. In other cases, the pressure to avoid the excise tax is leading to some cost-shifting.

Over the coming weeks, we’ll be analyzing the new data to find out what employer actions are having an impact on cost, so you can compare your strategies to best practices. First up: specialty Rx, one of the biggest health-plan cost drivers in 2015.