Retail and Hospitality Employers Brace for Higher Enrollment | Mercer US 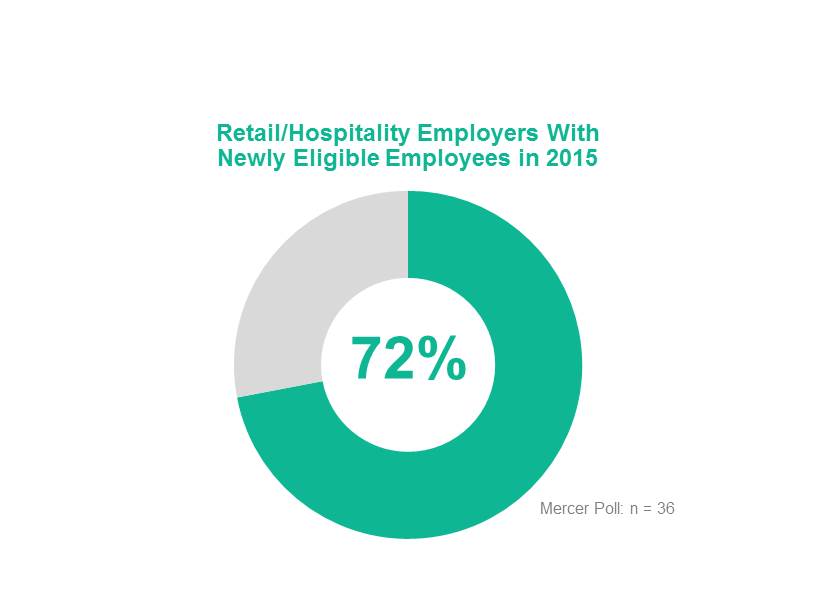 Employers with large part-time employee populations — in particular, those with retail and hospitality businesses — have been the most affected by the ACA’s requirement to extend coverage to substantially all employees working 30 or more hours per week. With the rule going into effect in 2015, Mercer took a quick poll of consultants working with clients in these industries to see how they expect to be affected by the rule and what they have done to prepare for it. We gathered information on 36 employers; most have at least 1,000 employees, and about half have 10,000 or more.

About three-fourths of the retail and hospitality employers — 26 out of the 36 in the poll — will have newly eligible employees in 2015 because of changes required by this provision of the ACA. The federal government offered employers “transition relief”; for 2015 only, they would be considered in compliance as long as they offer coverage to at least 70% of their full-time employees (in 2016 and beyond, coverage must be offered to at least 95%). However, only one employer in the group is taking advantage of the 70% safe-harbor for 2015.

Among those that will be affected, the impact of this rule ranges widely, from very substantial to minimal. For six employers, the number of employees eligible for coverage will more than double. For nine employers, the increase in the eligible population will range from 20% to 100%. Only six will see their eligible population grow by less than 20%. For all of these employers, however, the big question is how many of the newly eligible will actually choose to enroll. We won’t know that until after open enrollment ends.

Most of the 26 employers expanding coverage in 2015 took the step of adding a new, lower-cost plan.  In some cases, the plan is being offered only to the newly eligible (eight employers), but more often it will be available to all employees (13 employers).

Employees in retail and hospitality industries tend to be low-paid, and even a health plan that meets the requirement for affordable contributions could be a stretch for them financially. Some employers are offering a minimum essential coverage (MEC) plan with a value of less than 60%. Employees who enroll will not have to pay the individual mandate penalty for not obtaining coverage. And as long as the employer also offers a minimum value plan with affordable contributions, they will not be subject to any assessments for the employer mandate. However, if an employer only offers MEC to employees who work 30 or more hours, they could be subject to the “b” penalty if the employee signs up for qualified coverage in the public exchange. Of the 36 employers in the poll, 13 will offer a MEC plan to their benefit-eligible employees, and three will offer a MEC plan to non-benefit eligible part-timers.

The ACA requires that employee contributions for self-only coverage must be “affordable” — which is defined as costing no more than 9.5% of the employee’s household income. Because it is difficult for an employer to know what an employee’s household income is, employers are allowed to use a number of safe harbors for determining affordability. About half the retail and hospitality employers — 17 — are using the federal poverty limit; meaning that individual contributions are set at or below 9.5% of the FPL. Rate of pay is used by 10 employers and W2 earnings by two. The most common look-back period used is 12 months (29 employers), but five use six months.

For employers extending coverage to more employees in 2015, the potential increase in enrollment is a major wildcard in terms of cost. The current low trend in average health benefit cost per employee — under 4% in 2014, compared to the 7% over the past 15 years — won’t offer much relief if the number of workers an employer covers increases by more than a few percentage points.