Pension discount yield curve and index rates in US

These changes are reflected in the Mercer Index Rates — discount rates for the four Mercer sample pension plans, as determined using the Mercer Yield Curve. For June 30, 2022, there was an increase of 32, 26, 22, and 21 basis points respectively for the Retiree, Mature, Average, and Young plans.

Because both accounting and funding requirements take a market-based view of pension liabilities, financial market movements and linkages become important considerations to plan sponsors as they evaluate their benefit, funding, and investment policies. These linkages and the large changes in both discount rates and asset values over the past few years underscore the need to understand — and manage — how a plan’s net surplus or deficit responds to changing economic conditions. 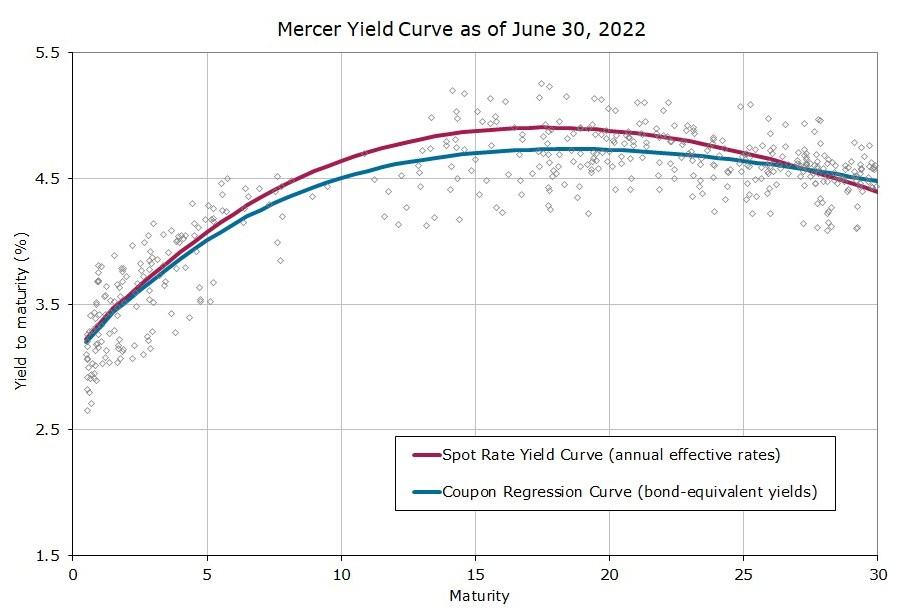 About the Mercer pension discount yield curve and index rates

The Mercer Yield Curve is a spot yield curve that can be used as an aid in selecting discount rates under various accounting standards for pension, retiree medical or other post-retirement benefit plans. To determine the discount rate for a plan, each year's projected cash flow is discounted at a spot (zero-coupon) rate appropriate for that maturity; the discount rate is the single equivalent rate that produces the same discounted present value.

The chart above illustrates the key elements of the Mercer Yield Curve. To derive the Mercer Yield Curve, we begin with all non-callable (with one exception noted below) and make-whole bonds that are rated Aa by either Moody’s Investors Service or Standard & Poor’s and have at least $250 million of outstanding issue. We eliminate those with very short maturities (less than one-half year) and those that are priced more than two standard errors from the market average. The included bonds are shown as data points above. We then use standard regression techniques to estimate the best-fit relationship between maturity date and yield to maturity (the blue line). The Mercer Yield Curve (red line) is then defined as the zero-coupon spot rates that are equivalent to the estimated yields to maturity on coupon-paying bonds.

Modified duration (“duration”) is an estimate of the percentage change in the present value of a series of cash flows for a one percentage point change in the discount rate. Thus, if a pension plan has a duration of 15, a one percentage point decrease in the discount rate (from 6% to 5 %, for example) would be expected to increase the value of the benefit obligation by approximately 15%. In certain situations, duration also corresponds to a weighted-average length of the underlying cash flows – hence its frequent denomination in “years.” Comparing the pension plan's duration with that of the plan's fixed-income investments is one tool that can help plan sponsors and fixed income managers assess how well the portfolio responds to changes in the present value of the pension cash flows. Note that duration itself depends on the discount rate and will change somewhat from month to month as the underlying interest rates change.

"Credit spread" is the difference in yield between corporate and Treasury bonds, and is a measure of the market's relative preference for the two types of bonds. We have approximated the credit spread for corporate AA bonds by taking the difference between the discount rate for the average plan using the Mercer Yield Curve and using the Treasury yield curve. Credit spreads for other durations and maturities will differ; credit spreads will also change, as corporate and Treasury bond yields respond differently to underlying economic events.

Effective November 30, 2012, the Mercer Yield Curve bond selection criteria were expanded to include:

Effective December 21, 2020, the Mercer Yield Curve bond selection criteria were expanded to include bonds that are callable at par within 6 months of maturity, where time to maturity is 10 years or greater.

Speak with a Mercer consultant

We’re eager to speak with you. Please provide your details below.
*Required Fields